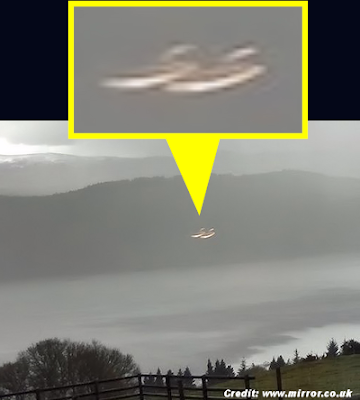 We recently presented a story of how tourists visiting Scotland’s famous Loch Ness came away from their vacation with a curious photo that subsequently became an Internet sensation.

When Alan Betts and his wife, Anna, first looked at their holiday pictures after returning to their York, UK, home, they noticed something odd in the following image that had been taken by Anna’s mother.

When the Betts zoomed in on the picture and saw something weird in the sky above the water, they released it to the media, hoping someone would determine the true identity of this possible UFO.

Someone did come forth, claiming to know exactly what the photo shows.

“It’s almost certainly just the reflection of a light inside the room, doubled up by [a] dual pane window,” according to Mick West, a retired video game programmer who now runs Metabunk.org, an online site, “dedicated to the art and pastime of honest, polite, scientific investigating and debunking.”

Betts confirmed to HuffPost that various pictures West used from a promotional video (seen below) show the cottage her family stayed in while on vacation.

But, can pictures culled from a real estate video be the best source of an investigation that requires very precise image analysis? . . .