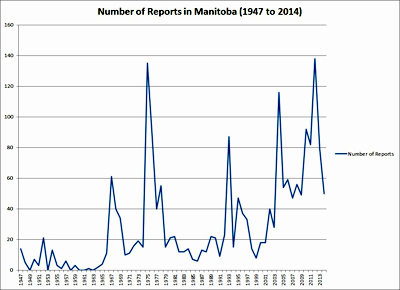 The annual Canadian UFO Survey, prepared by Winnipeg-based Ufology Research, has been collecting data on reports of unidentified flying objects since the late 1980s. Its 25-year analysis of Canadian UFO cases looked at about 15,000 reports from coast to coast, with an average of several hundred per year. Last year, Ufology Research’s 2014 Canadian Survey studied more than 1,000 UFO cases reported in Canada, or almost three cases each day.

But what about Manitoba, by itself?

Although unusual objects in the sky have been seen and reported throughout history, the “modern” UFO era began in 1947 when pilot Kenneth Arnold reported seeing several metallic objects flying over Mount Rainer in Washington. In subsequent years, the then-called “flying saucers” were reported around the globe. Not surprisingly, many sightings were reported in Canada, and many were by observers in Manitoba. The infamous Project Blue Book and related earlier official studies by the US Air Force included many Manitoba reports. Blue Book files have been released to researchers and the Manitoba cases have been extracted.

In addition, historical records from newspaper archives, journals and personal diaries have been scoured for reports of unusual aerial objects. These and all other sources were used to add Manitoba reports into a master database for studying what Manitobans have been seeing in the province’s skies. . . .