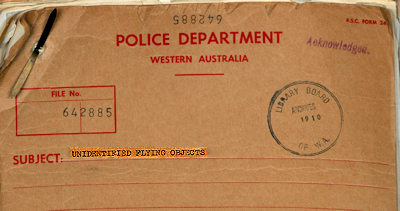 Australian UAP researchers have long been aware that in the 1950’s and 1960’s, the RAAF when investigating reports of UAP, used the resources of state police forces to interview witnesses. The evidence for this is to be found on RAAF “Unusual Aerial Sightings” files, held by the National Archives of Australia. However, until now, no one has ever located a whole state police force file on the subject.

Courtesy of Dr Stuart Hatch of GovHack 2015, (click here) who found a Western Australia police department file, number 64/2885, we now have one such file.

What is on the file?

This is a 55 page file, with documents on it in the date range 1951 and 1975. The following will give you an idea of what is contained therein.

Report details. At 1100hrs on 8 July 1975. Casley attended the Northampton police station to report a number of UAP observations. She and her husband had seen a “…strange orange coloured object in the air…it lands and seems to take off again.” At 0900hrs 8 July 1975, while driving north to Northampton, she saw “…a very large white ball. This ball was about 2 to 3
cars round…it was present for about 10 to 15 seconds and then vanished. It did not move away just disappeared. The object was about half a mile away, to the east…” Soundless.

Between 2030-2100hrs about 18 June 1975, in the same area, “…an object shaped like cow horns was seen about 300 yards away on the ground. It appeared about 4 foot long with a bright light in the centre, with the lights getting less bright as they went to the horn shape.” It then took off and slowly disappeared from the inside out. No sound. Seen by Valerie and Wayne Casley. . . .