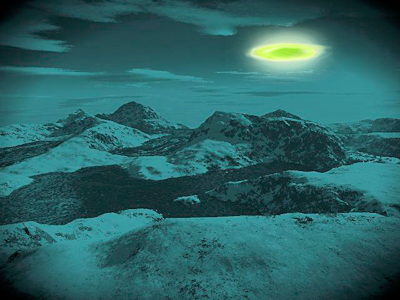 It had all of the ingredients. An exotic locale, experienced witnesses and a season that was ripe for fostering the imagination, shortly before man’s arrival on the Moon. It is for this reason that the UFO which paraded across the Antarctic 50 years ago was a landmark that had pride of place in the covers of all of Argentinian dailies, triggering a collective psychosis that lasted that entire winter and a little longer.

Tomorrow will mark half a century since the main sighting. While it was later learned that previous episodes existed, it was on July 3, 1965 when a small number of people, the only ones for hundreds of miles around, found themselves staring at the skies in fascination.

The Argentinean base – Decepción – held fewer than 20. At 19:40 hours that Saturday, the night had been clear and peaceful for a good while, and it was then that the weatherman noticed it. The Navy communiqué would subsequently speak in terms of a “lenticular mass” – two concave surfaces stuck together, like a lentil.

This “lentil”, according to various accounts, moved across the sky changing colors, the predominant ones being red and green, putting on quite a show: a display of yellow, blue, green, orange and white hues. 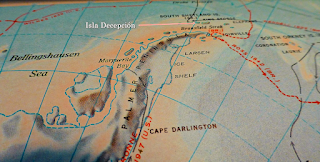 The weatherman summoned everyone. Except for the radioman, who happened to be on duty, the entire detachment was able to see the object and follow it with the detail provided by their binoculars and theodolites. Some 10 to 15 kilometers distant, the object was traveling in a generally eastward direction, although it made momentary westward changes at some 45 degrees. Its speed was variable, according to reports; it made no noise whatsoever, and at times remained suspended in space. The Navy communiqué indicated that the display lasted some 15 or 20 minutes under excellent visibility conditions. The protagonists would later state it lasted longer than that.

Civilian meteorologist Jorge Hugo Stanich reached for his camera and photographed the object as best he could. Nothing appeared on any of the photos – it was a low-sensitivity photographic emulsion for the prevailing darkness and he lacked a tripod. A curious side note to all this was the disruption of geo-magnetic instrumentation which accompanied the sighting.

A few days later, the story exploded, commanding the headlines of all domestic newspapers. Clarín spoke to the commander of the Decepción base – Lt. Cmdr. Daniel Perissé.

“We have only seen an unidentified flying object. According to the information in our possession, this was the same one witnessed by the Chilean and British detachments. I can add that this curious event was also seen on earlier dates, and always involved a single object.” 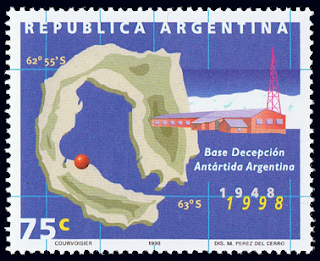 This information was indeed confirmed by the staff of Great Britain’s “B” base and the Pedro Aguirre Cerdá, which stands abandoned today. Even there, Corporal Uladislao Durán Martínez managed to take ten photographs, but months would go by before they were developed, following the personnel rotation, as no lab facilities were available. The corporal returned to Santiago in January ’66 with the film, which was forgotten. Either a conspiracy or blank negatives – you can choose your own adventure.

All this was followed by an agitated month of July. With the Argentinean delight for psychoses, UFO accounts appeared throughout the country, each of them commanding a good number of inches of page space.

First, seven teenagers near Pilar on a camping trip saw a UFO. Then there was a case near the Morón air base. Lights were photographed in the sky over Bahía Blanca. Similar accounts were repeated in Mendoza, Resistencia, Rosario and Mar del Plata. On August 1, binoculars at the Palermo Racetrack, usually aimed at the ground, focused on the sky on account of a strange balloon. The whole event lasted a few minutes, until it was announced over the loudspeakers that “only five minutes were left for placing bets.” Argentina had become a sort of UFO garage.

On August 4, the La Plata Observatory soothed the UFO effervescence that had so many people looking at the sky rather than the ground. After consultations made with centers specializing in the tracking of artificial satellites, it was explained that the U.S. Echo II satellite, launched on January of that year from Vandenberg AFB for communications duty, could have been seen from the Decepción base at the same day and time as the UFO sighting. [The Echo] was an enormous aluminized plastic balloon, highly reflective.

The tide subsided, although more eyewitness accounts took place that year. In August, officers from the Punta de Vacas squadron in Mendoza reported seeing a UFO playing in the heavens for some eight minutes. Later, in the capital of La Rioja, two men reported seeing a UFO fly directly over the car in which they drove. In early October, at Villa Characato, in the department of Cruz del Eje (Córdoba), a teacher and a group of female students claimed seeing a 30 centimeter device coming and going in the air at some 400 meters overhead before vanishing.

One of the cases appearing in the newspapers during these months occurred in the city. A child attending the No.9 School saw a light changing colors and making strange movements. The mother also saw the object and corroborated the story. The father, somewhat more skeptical, told Clarin with a thin smile: “He’s not a fantasy-prone boy, but he’s that age.”

Two years after the sightings, volcanic activity caused there to be no winter activity on Decepción Island. UFO sightings were ongoing in the ‘70s and ‘80s, but nothing came close to the 1965 wave, the Year of the UFO. The experience left a deep mark on Lt. Cmdr. Daniel Perissé, who went on to become one of the country’s best-known ufologists, first as a member of the Comisión Permanente de Investigacion del Fenomeno Ovni (Standing Committee on UFO Research) and later as a civilian.