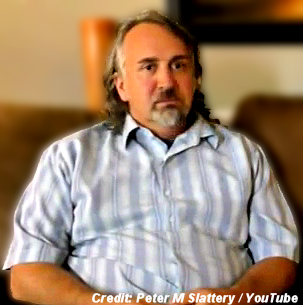 Romanek Incredibly Claims He Discredited Himself as Instructed During Death Threat

Controversial alleged alien abductee Stan Romanek was back in front of the camera recently making more difficult to believe allegations. Romanek apologized in a video published July 5 (see below)for his well known stunts on a 2014 episode (see below) of the Peter Maxwell Slattery Show, in which he was observed on video trying to discretely throw objects about while suggesting paranormal events were occurring. However, along with his recent apology, Romanek outrageously asserted that he was intentionally discrediting himself as instructed at the time or else suffer grave consequences to himself and/or loved ones. Slattery, who accompanied Romanek in the July 5 video, rather incredibly framed Romanek as courageous for coming forward to supposedly set the record straight, suggesting Romanek was forced to live with tremendous guilt and conflict knowing he had disappointed his following but did so as a sacrifice to protect his family and friends.

The duo repeatedly alleged that the Romanek case was very serious due to the many death threats directed at Romanek and the purported extents of government interest. Also repeatedly referenced was documented evidence of such circumstances, but the purported evidence was never presented. Many will suspect that even if the individuals sincerely believe such evidence exists, it is not documentation of the things they believe it to be, but indicative of other, much less extraordinary circumstances. It is indeed difficult to accept such people are in grave danger who allege so in videos posted on YouTube and filmed from their home.

Stan Romanek opened the video by discussing what he alleged to be numerous instances of his phone being tapped, spanning many years, his computer hacked and related circumstances. He provided no confirmation of such claims.

Also leveled were claims of a bomb threat once occurring at a venue where Romanek was scheduled to speak, but, again, documentation thereof was not actually presented, nor was evidence that it had anything to do with either Romanek or extraterrestrials. One such claim of a break in and bomb threat surrounded a Romanek appearance in 2009, but there were reportedly no local police records of any resulting investigations. Some suspected the incidents were related to publicity stunts.

While the more loyal of Romanek’s supporters may be pleased with his latest video appearance, others will no doubt find it indicative of the widespread lack of critical thinking and perpetual absence of direct evidence that typically plague the alien abduction genre. If claims of alien abduction are expected to be taken literally, then proof of their validity must be presented. Anything less does not warrant such an extraordinary conclusion. Convoluted tales carrying indirect implications many times removed from a cogent point may be entertaining to some, but it will never substitute for actual direct evidence and verifiable proof.

Romanek has some serious legal issues and potential related mental health challenges. By his own admission in the latest video, he has been under tremendous stress. It is not clear his supporting cast fully understands the situation or all of its implications. Regardless, the seemingly desperate tactics employed are arguably evermore disturbing, particularly given the overall set of circumstances.

Using Your Own Common Sense in UFO Investigations