Last week a green ghost rider appeared in the sky over the British city of Nottingham when scientists started testing a newly developed projecting device which allows the beaming of moving images directly onto clouds for the first time ever. 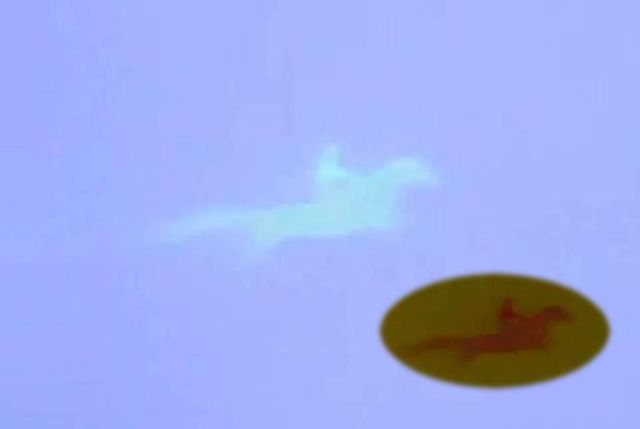 The image of a galloping horse rider was projected onto the clouds from a distance of 50 meters by a special laser-based projection system mounted on an aircraft.

The system beaming the images into the clouds was invented by a research team, calling itself Project Nimbus.

It is composed of a designer, Dave Lynch, and a chemist, Dr Mike Nix, from the University of Leeds, reports RT.

And with this new technique they can also project images of alien craft, aliens, monsters, angels – you name it, and it brings us back to Project Blue Beam.

Extract from “What is the Blue Beam Project?“

This secret illuminati project will pretend to be the universal fulfillment of the prophecies of old; as major an event as that which took place 2000 years ago.

In principle, it will make use of the sky as a holographic projection screen for space-based laser-generating satellites. These projectors will project simultaneous holographic images to the four corners of the planet, in every language by region and different images according to the predominating regional religious faith.

The first step concerns the breakdown of all archaeological knowledge.

It deals with staging earthquakes at certain precise locations around the planet where supposed new “discoveries” will finally explain (for them) that the meanings of the basic doctrines of all the world’s major religions are “wrong.”

The second step deals with the gigantic space show.

3D optical holograms and sounds, laser projections of multiple holographic images in different parts of the world, each receiving a different image, according to its predetermined original national religious faith. This new “god” image will talk in all languages.

ELF (Extra Low Frequency), VLF (Very Low Frequency), and LF (Low Frequency) waves will reach the people of the earth through the insides of their brains, making each person believe that his own God is speaking to him from within his own soul.

The first one is to make mankind believe that an alien invasion is about to occur upon every major city on the earth. This is to push each major nation into using its nuclear capability to strike back. In this manner, it would put each of these nations in a state of full disarmament before the United Nations after the false attack.

The second is to make the “christian” believe that a major rapture is occurring, with a simple “played” divine intervention of an alleged “good” alien force coming to save the good people from a brutal satanic attack. Its goal is to get rid of all significant opposition to the NEW WORLD ORDER.

The third orientation is a mixture of electronic and supernatural forces. The waves (frequencies) used at that time will allow supernatural forces to travel through fiber optics cable, coaxial cable, electric and telephone lines in order to penetrate all electronic equipment and appliances that will by then all have a special microchip installed.

After the Blue Beam show is completed, humanity is believed to be ready for them to enter in a “new Messiah” to reestablish peace everywhere at any cost, even at the cost of freedom.

Wernher von Braun gets it right with his statement that they are going to fake an alien invasion to justify the huge costs of the secret space weapon systems and to promote the NWO agenda?

Below the video of the galloping green horseman.