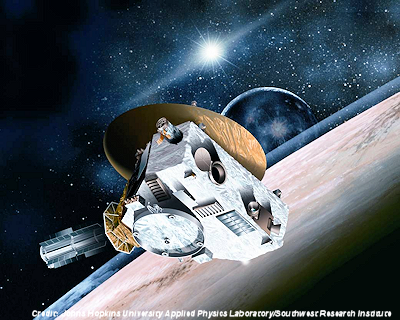 News of the Earth these days is such that one welcomes news from elsewhere, especially when it concerns a prospect as spectacular as the impending flyby of Pluto by the NASA spacecraft New Horizons that will take place on July 14.

In reality, of course, New Horizons also represents news from Earth, having been built by humans and launched from Cape Canaveral in January 2006. Moreover, the New Horizons probe is not simply a technological artifact; it is the result of a political process and a policy debate. At issue were not only the parameters of the mission — its scope, timing, budget, and so on — but also the fact it uses a nuclear power source fueled, appropriately if controversially, by plutonium.

The plutonium-238 isotope used by New Horizons is an exceptionally hazardous material that is dangerous to produce, manufacture into suitable form, handle, transport and launch. The hazards are sufficient, in the eyes of some, to preclude its use altogether.

NASA and Department of Energy engineers did not dismiss public concerns about the safety of plutonium-fueled power sources, but they argued that the risks could be mitigated to an acceptably low level by proper design. . . .

(Another) Message for Aliens To Be Carried on NASA Spacecraft