An Indiana witness near Newport recalled a UFO incident from 1994 when a slow moving, triangle-shaped UFO moved low over a government installation while he was conducting security work, according to testimony in Case 66660 from the Mutual UFO Network (MUFON) witness reporting database. 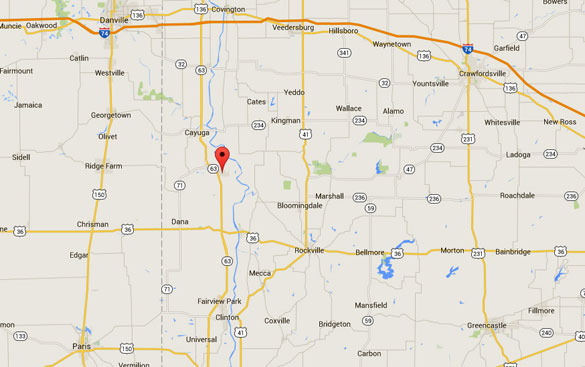 Newport is about 30 miles directly north of Terre Haute, IN. (Credit: Google Maps)

The witness was working a midnight shift with a partner on a routine patrol of the perimeter fence line installation about 2 a.m. in September 1994 when the object was observed.

“We had stopped to observe a northern section of the fence line,” the witness stated. “I noticed a dim light in the distance that seemed to be above the ground level and tree line. So we stayed in the vehicle and observed the light configuration as it grew nearer to our position.”

The two continued to watch the object on this dark night.

“It was a dark, moonless night, and you couldn’t see your hand in front of your face. The one light that we first observed had gotten larger, and it was soon apparent that the craft had a glowing globe on each of its corners.”

Suddenly the air in the area seemed different.

“As the craft continued to approach, the air seemed to get muggy and hard to breath. It was like a dead air situation. The craft just kept getting larger and larger as it approached our position. It seemed like a long time had passed when it finally reached the fence line where we were.” 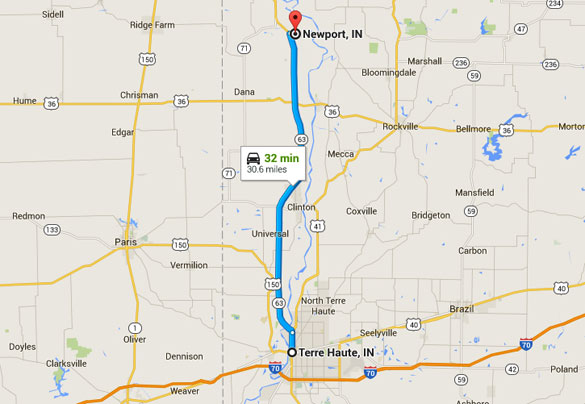 Newport, IN, today is a rural area with a population of 515. (Credit: Google Maps)

“The size of that thing was huge. It was at least 300 to 350 feet in length and at least 125 to 150 feet wide on the tail end of its triangle shape. The top of the craft was not dome shaped, but it looked like it was a raised structure with portals along its sides, like the port holes in the side of a sailing ship. They were dimly lit and in a neat row close to the mid line of the craft. The bottom of the craft was like a giant convex mirror.”

The witness noticed that the object picked up reflections from the ground.

“Everything that it passed over was reflected in it like it was high noon on a bright sunny day. I could even see my own reflection along with my partner and the patrol truck in it. And there was no light reflected back from its surface to the surrounding area.”

The craft was now very slow moving and very close to the ground.

“The craft was moving at a snail’s pace of about 5 to 7 mph. If I would have climbed into the bed of the patrol truck, I could have reached up and touched the craft with my hands. The craft drifted over the tree line to south of our position and we lost sight of it.”

The two witnesses decided to move to another location to continue to observe the object as it moved away.

“Since the craft was moving at such a slow rate, we got back into the truck and moved for a better vantage point to see it egress the area. But when we had moved only about 100 yards to the next clearing or vantage point, the craft had vanished.”

The witness reported the object.

“When I reported this incident to my boss, I was told not to repeat it to anyone. He told me that he had seen it too. And he hinted to me that if I knew what was good for my job, I didn’t see what I saw. And if I were asked by anyone about the situation, I was to tell them that all I had seen was a low flying air craft with engine trouble.”

The witness tried to officially report, but was again told not to talk.

“When I told him that I knew just what I saw, I also told him that I was a licensed pilot, certified by the FAA, and that was no aircraft that was from this Earth. He told me to just keep my mouth shut and get out of his office.”

Now 21 years later, the witness wants to get his story out about what was seen. 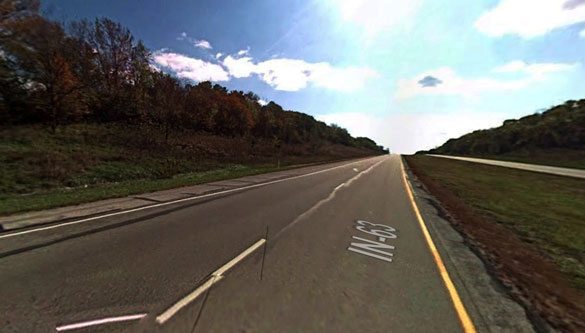 The military witness tried to report the September 1994 incident, but was told by a superior officer to not say anything. Pictured: Rural Newport, IN. (Credit: Google Maps)

“I can supply additional information in the form of a hand drawn sketch, but I’ll have to send it snail mail. I have no way to upload it into my computer. The other witness to this sighting, to this day, still refuses to acknowledge any truth to this event for fear of public ridicule.”

Newport is a town in Vermillion Township, Vermillion County, Indiana, population 515. Please remember that most UFO sightings can be explained as something natural or man-made. The above quotes were edited for clarity. Please report UFO activity to MUFON.com.