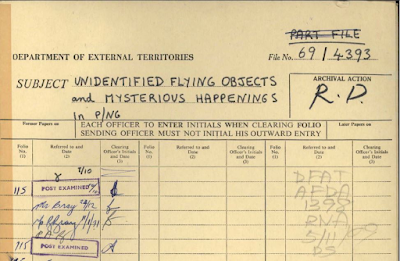 Last year, I located details on the National Archives of Australia (NAA) RecordSearch database system, of a previously unknown UAP file. I submitted a request for the file to be examined for release. It has taken until now for this request to be processed, and for a PDF copy of the file to be made available to me.

The file cover gives the title as “Unidentified Flying Objects and mysterious happenings in PNG.” The PDF file contains 107 pages of documents. Interestingly, the file cover bottom right hand side, says “PART File 69/4393,” and the inside cover, states “Confidential part file cancelled 15/2/71.” The end cover of the file goes on to state, “Unclassified part of 69/4393.” Later on in this post, I will provide my interpretation of the meaning of all these comments.

The first sighting on the file is dated 6 Dec 1957 from “Patrol post, Vanimo, Sepik District.”… where two corporals reported a nocturnal, bright, white light descending apparently to the ground, for a …muffled impact was heard.” The corporals were Royal Australian Engineers. Due to time and financial limitations, a decision was taken to do nothing about the report.

A memo, dated 12 Feb 1958, from the Commonwealth Scientific Industrial and Research organisation (CSIRO) to the Department of Territories (DOT) concluded that the object was most likely a meteor. A Department of Defence (DOD) memo, dated 26 Feb 1958 included (we) “…would appreciate being informed of any similar observations in the future. It is not, however, considered that a search would be justified from the Defence aspect in this particular instance.”

Image 98 of the digitised file is an encrypted radiogram addressed to “Territories Canberra” received 8 Jul 1958. Image 97 decodes the cable. Three people reported a “mysterious light explosion” between 1900-2100hrs July 2nd. Later papers reveal that the location was “South of the Shortlands.”

A June 1959 radiogram to Canberra reported a UFO at 1900hrs Sunday 24 May 1959. Looking westwards, high in the sky, an object was seen to descend “…erratically in SW direction. Colour was of a brilliant blue.” Disappeared at 2015hrs. A DOD memo dated 29 Jun 1959 noted they had copied the report to both the Departments of Air, and Civil Aviation. . . .