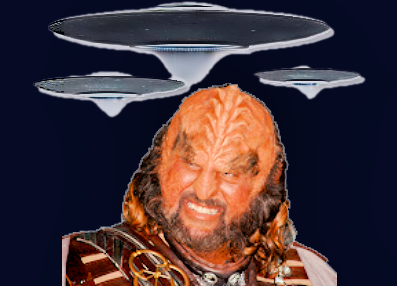 Klingon was the chosen language for the Welsh government in its response to queries about UFO sightings at Cardiff Airport.

While English and Welsh are the usual forms of communications in the Senedd, it opted for the native tongue of the enemies of Star Trek’s Captain Kirk.

Shadow Health Minister Darren Millar had asked for details of UFOs sightings and asked if research would be funded.

In full it said it translated as: “The minister will reply in due course. However this is a non-devolved matter.”

It is believed to be the first time the Welsh government has chosen to communicate in Klingon. . . .

‘UFO Sighting’ Over Wales Leads To Facebook Appeal for Witnesses