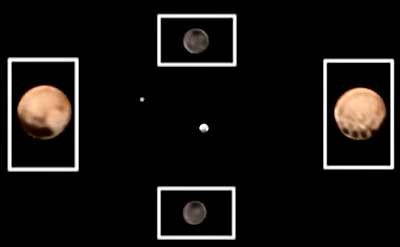 NASA’s New Horizons probe is about to lift the veil on Pluto. On July 14, New Horizons will perform the first-ever flyby of the faraway dwarf planet, zooming within 7,800 miles (12,500 kilometers) of its frigid surface. The close encounter will give researchers their first up-close looks at Pluto, which has remained mysterious since its 1930 discovery. LATEST VIDEO: Undiscovered Country – How Many More Plutos Are There?

Update for Sunday, July 12: As of Sunday morning, New Horizons was just 1.36 million miles (2.19 million kilometers) from Pluto, and less than two days from closest approach. The spacecraft is healthy and performing well, mission team members said. The team received some optical-navigation data from New Horizons earlier this morning and expects to get a final set around 1:30 p.m. EDT (1730 GMT) today; this information will help the probe’s handlers determine if they need to make any slight timing adjustments to their plan for science observations during closest Pluto approach, which will occur at 7:49 a.m. EDT (1149 GMT) on Tuesday (July 14). At that time, New Horizons will zoom within 7,800 miles (12,500 km) of the dwarf planet’s surface. . . .