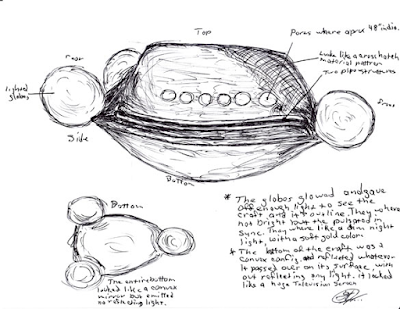 The Indiana witness near Clinton who recently recalled a UFO incident from 1994 when a slow moving, triangle-shaped UFO moved low over a government installation while he was conducting security work, has named the Newport Chemical Depot as the site during an interview with Indiana MUFON Field Investigator Ned Delaney, in Case 66660 from the Mutual UFO Network (MUFON) witness reporting database.

The witness stated that he was on patrol at the Newport Chemical Depot near Clinton, Indiana. The witness was working a midnight shift with a partner on a routine patrol of the perimeter fence line installation about 2 a.m. in September 1994 when the object was observed.

“We had stopped to observe a northern section of the fence line,” the witness stated. “I noticed a dim light in the distance that seemed to be above the ground level and tree line. So we stayed in the vehicle and observed the light configuration as it grew nearer to our position.”

. . . “As the craft continued to approach, the air seemed to get muggy and hard to breath. It was like a dead air situation. The craft just kept getting larger and larger as it approached our position. It seemed like a long time had passed when it finally reached the fence line where we were.”

“The size of that thing was huge. It was at least 300 to 350 feet in length and at least 125 to 150 feet wide on the tail end of its triangle shape. The top of the craft was not dome shaped, but it looked like it was a raised structure with portals along its sides, like the port holes in the side of a sailing ship. They were dimly lit and in a neat row close to the mid line of the craft. The bottom of the craft was like a giant convex mirror.” . . .

Wave of Flying Triangles and Boomerangs Over Poland: UFOs or Secret NATO Crafts?