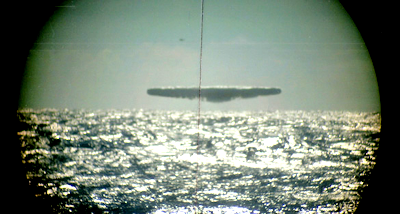 Several impressive photos of alleged UFOs over the arctic captured on camera by the Navy in 1971 have been leaked to UFO researchers, and their discovery has been getting worldwide media attention.

UFO researcher Alex Mistretta claims that the images were originally given to him by an anonymous source in Europe. Later, he discovered that they were also published in a French paranormal magazine called Top Secret.

To further investigate, Mistretta enlisted the help of John Greenewald, who runs the website TheBlackVault.com. He asked Greenewald to post the pictures in hopes that Greenewald and others may be able to find out more about the images.

After posting the story last week, it began getting international headlines. A Reddit user that goes by the name SqizCat was also able to find higher resolution copies of the images.

The images are fantastic. They seem to be of large objects aloft over the ocean, some, if not all, taken from the periscope of a submarine. The big question is are they real, and if so, what are they?