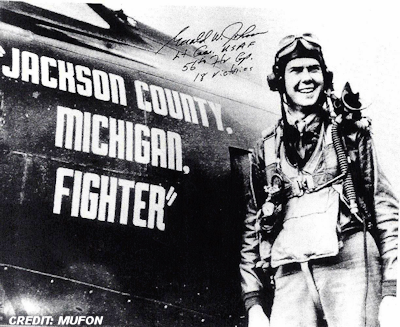 This military UFO encounter occurred while the witness was piloting a plane east of Los Angeles.

Born in 1919, he interrupted his college education in September 1941 to enter the Aviation Cadet Program. Upon earning his commission and pilot wings, he joined the 56th Fighter Group at Bridgeport, Connecticut, flying the P-47 Thunderbolt. In January 1943, his unit deployed to England, and eight months later, on August 19, he shot down his fifth German aircraft to become the first ace in the 56th and the second US Army Air Force’s ace in the European Theater.

Johnson assumed command of the 63rd Fighter Squadron in February 1944, but on March 27, he was forced down by ground fire and captured by German forces.

By that time, he had flown 88 combat missions and scored 16 and one-half aerial victories. He spent the remaining months of WWII in Stalag Luft I. Following the war, he commanded the 62nd Fighter Squadron of his old group – the 56th. After graduating from Boston University in 1950, he returned to flying at Turner Air Force Base, Georgia. There, from 1951 to 1957, he served in many leadership positions. He began as Deputy Director for Operations in the 31st Fighter Escort Wing, flying the F-84 Thunderjet, and ended as the first Commander of the 4080th Strategic Reconnaissance Wing in the RB-57 Canberra and top secret U-2. . . .