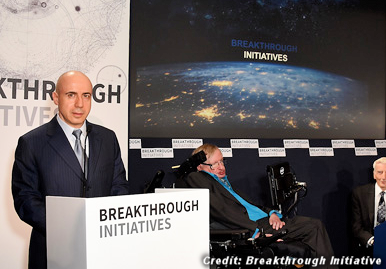 Scientists working on the Search for Extraterrestrial Intelligence (SETI) got an unprecedented boost in funding that will greatly increase their ability to listen for aliens. The announcement was made Monday at the Royal Society in London.

Russian billionaire Yuri Milner shared the stage with Stephen Hawking to make the announcement. Milner has pledged to donate $100 million over the next ten years. The funding will help gain access to two of the largest and most powerful telescopes in the world, the Green Bank Telescope in West Virginia and the Parkes Telescope in Australia.