The discovery of the Americas has for centuries been credited to explorer Christopher Columbus, but ancient markings carved into rocks around the US could require history to be rewritten. 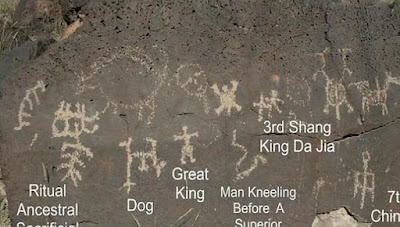 They have found pictograms etched into the rocks around the country that appear to belong of an ancient Chinese script. Read more here.

In July 2014, an avocational surface collector chanced across a partially exposed Chinese votive sword behind roots in an eroded bank of a small stream in Georgia.

The 30-centimeter-long (foot-long) artifact is possibly a one-of-a kind find in North America and is another example in the growing list of seemingly out-of-place Chinese artifacts suggesting Chinese travel to North America in Pre-Columbian times. Read more here.