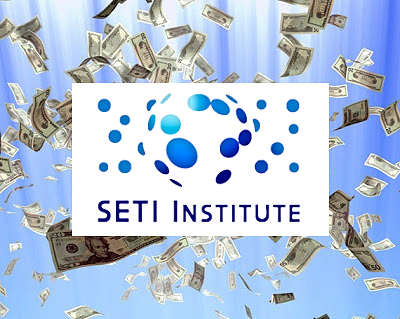 Damn – how about that $100 million wad Russian venture capitalist Yuri Milner dropped on the SETI crowd Monday? This is real money, folks. You could buy nearly eight dozen Bradley Fighting Vehicles with that kind of loot. More than half a century of scanning the heavens for a single intelligent radio signal without a glimmer of hope. Now. Suddenly. “This is beyond my wildest dreams,” veteran radioastronomer Dan Werthimer of U-Cal Berkeley gushed on Monday.

Talk about your reversal of fortune. It was just last year that Werthimer and SETI colleague Seth Shostak visited Capitol Hill to make fruitless pleas for chump change from the dim lights on the House science committee. Today, the SETI buffs are so flush with cash, it makes the $25M that Microsoft co-founder Paul Allen sunk into building 42 radiotelescopes in the California outback look stingy

Code-named Breakthrough Listen, Milner’s pricey gambit on some fancy supercomputers hopes to succeed where 55 years of ET signal-hunting have drawn blanks. Milner says he was motivated by the burgeoning number of exoplanets being discovered in theoretically habitable zones around distant stars. So he’s vested in an amazing package. SETI operatives working telescopes in Australia and West Virginia will now be able to filter cosmic noise through 10 billion channels simultaneously, and do it 100 times faster than active programs. They’ll be targeting one million Milky Way stars closest to our solar system, and 100 other galaxies. Or so we’re told.

The announcement was designed for maximum impact, timed as it was to coincide with another Apollo 11 anniversary, and featuring luminary physicist Stephen Hawking at London’s venerable Royal Society. On hand were pioneer planet-hunter Geoffrey Marcy, SETI godfather Frank Drake (“It’s just a miracle”), and Lord Martin Rees, whose title is Astronomer Royal of the United Kingdom.

You may remember Lord Rees. None of these SETI boosters appear to know beans about UFOs and, in fact, they’re often quick to tout their disinterest in The Great Taboo. But they seem to know an awful lot about how space aliens think, that their ET counterparts are all sitting in front of digital consoles, just like us, hoping to confirm the existence of the elusive Nobel Prize-winning “Wow!” signal. In 2012, Lord Rees likely spoke for the whole field when he said, “I dismiss [UFO reports] because if aliens had made the great effort to traverse interstellar distances to come here, they wouldn’t just meet a few well-known cranks, make a few circles in corn fields, and go away again.” De Void wondered how Lord Rees knew so much, and asked via email if ETs might also choose to communicate with us via robotic artificial intelligence probes, a theory proposed by NASA historian Steven Dick in a 2003 edition of the International Journal of Astrobiology. Lord Rees responded with a quick blow-off: “Thank you for these interesting thoughts. Best regards Martin Rees.”

So yeah, SETI’s got it all figured out and radio/laser signals are the only way to go and that’s why the world should celebrate its $100 million windfall. And it’s not costing us a cent. Still, De Void can’t help but recall an observation made last year by maybe the only House committee member who actually paid attention to what Werthimer and Shostak were saying in their pitch for federal funding. Maryland’s Donna Edwards, a former systems engineer with Lockheed Martin at NASA’s Goddard Space Flight Center, made her own pitch — for alternative thinking: “What’s intriguing about this conversation is the idea that – and it’s a little bit of hubris, right? – somehow we’re waiting to find them as opposed to them finding us. And maybe that’s just the nature of homo sapiens because that’s kinda what we do.” The ranking Democrat on the committee had heard it all before, and concluded, “I think I’ll just go back to watching my movies.”

Anyhow, SETI, good luck with all that Russian money, maybe you’ll get finally get lucky. In the meantime, De Void wonders what just one percent of that cash could do for a shoestring nonprofit like the National Aviation Reporting Center on Anomalous Phenomena, led by a retired NASA scientist who coordinates research projects with foreign governments. These guys work with actual data.

Whoops, oh yeah, P.S.: A second component of Milner’s initiative is a PR stunt called Breakthrough Message, which will invite Earthlings to frame messages to send to ET. A million bucks in prize money will be awarded for the best questions. Let me go ahead and disqualify myself right now: “Yo, Planet Zyrtec, what’s up with UFOs?”