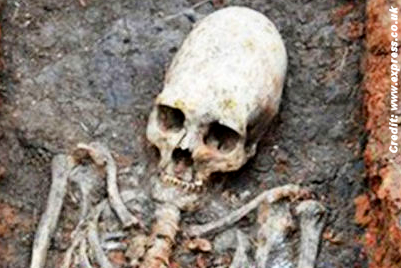 UFO hunters are hoping the discovery of a skeleton with a huge skull will become conclusive proof of aliens visiting Earth.

The spectacular full skeleton with an “alien-like skull” was discovered at Arkaim, known as Russia’s answer to Stonehenge.

It has sparked fresh hope among the UFO community that tangible evidence of extra terrestrial beings has now been found.

UFologists rushed to insist it was proof that aliens had once visited Earth when pictures of the humanoid figure with the egg-shaped skull emerged.

Video has been released of Russian archaeologists unearthing the strange-shaped skull . . ..