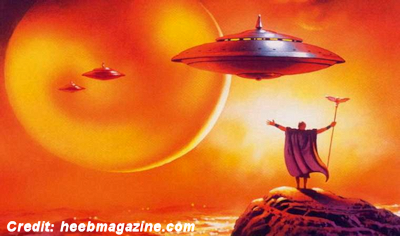 Here’s one that’s sure to disappoint the thin venn segment of people who love the state of Israel, and also believe that all life on Earth is the product of extraterrestrial scientific meddling. The Raëlian movement has officially (officially!) renounced Zionism, and declared themselves the “true Jews,” urging the rest of us to convert to Raëlism before it’s too late.

What’s Raëlism? So glad you asked.

The Raëlian movement believes that, in 1973, their founder Claude Vorilhon (now known as Raël, of course) received a message from an extraterrestrial named “Yahweh,” explaining that the ancient angles, cherubs, and divine beings throughout human mythology are actually alien scientists (“Elohim”), responsible for seeding life on this planet. What’s more, once our species reaches a certain developmental stage, the Elohim will make themselves known world-wide, and we’ll enter into an age of extraterrestrial enlightenment.

Meet the Raelians: Inside the World’s Strangest — and Nicest — UFO Sex Clone Religion

Life On Earth Was Created By Scientists Belonging To a Superior, Alien Civilization