A giant spherical object passes the Sun before it finally disappears as an almost invisible dark spot into space. 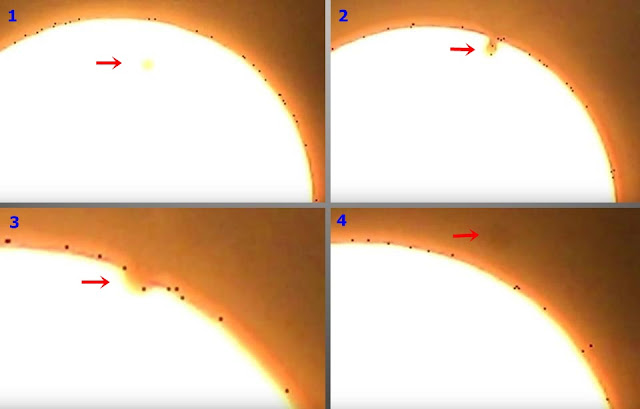 What you are seeing here is a solid object, whether it is a planet, like Mercury or Venus, transiting the Sun or it is a ‘cloaked’ unidentified flying object.

Ever, a scientist at NASA, Mr. Joseph Guman explained that these spheres are ‘Compression artifacts, highly magnified’.

But if these spheres are compression artifacts then they would have been there since the first day NASA satellites, like SOHO, began sending photo’s back to Earth!

U.S. meteorologist Scott Stevens has a different opinion about these spheres and other anomalies near the Sun.

In a 2006 article published by pravda.ru Mr. Stevens told that he has analyzed all photographs available in the SOHO archives. He claims to have found several perfectly identical objects on the photographs taken during a number of years.

Therefore, the researcher says, it would be only logical to point out that UFOs would have never been the objects of the same size and form if stardust or residual solar plasma had really caused those “irregularities.”

“I am confident that UFOs are flying in the vicinity of our star,” says Stevens. “I am talking about a fleet of UFOs operating near the Sun.

I believe that both NASA and the U.S. government are aware of the existence of a certain civilization whose spacecraft are capable of resisting extremely high temperatures.

The powers that be are simply afraid to admit the fact. They haven’t yet decided on the tactics,” says Stevens.