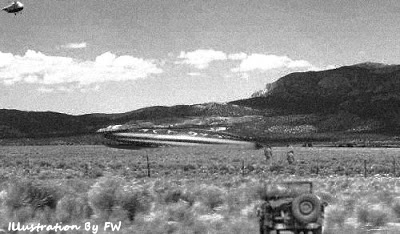 In 1953, a group of experts visited a secret crash site

… In 1953, the Nevada Test Site was testing a variety of methods of payload delivery, and in May of that year they were preparing a series of tests under the series “Operation Upshot-Knothole.”

Eleven tests were carried out through air drops, towers and a gun-deployed warhead shot out of an artillery piece named Atomic Annie.

The most telling evidence of a possible UFO crash in the Kingman area came from an engineer on that test in Nevada. According to the engineer’s narrative, he was taken to work under “Project Blue Book,” an Air Force investigation of UFO phenomena conducted through 1969.

His narrative was transcribed and written by Raymond E. Fowler, a regional investigator with the National Investigations Committee on Aerial Phenomena, in 1973. The narrative below was taken from the engineer’s journals at the time:

… We disembarked from the bus one at a time as our names were called and escorted by military police to the area that we were to inspect. I noticed that as I was walking to the vehicle, that it was saucer-shaped. It was about thirty feet in diameter. The material looked like brushed aluminum. The entranceway was vertically lowered and apparently had jarred open. There was a light coming from inside, but it could have been installed by the Air Force. …

Phoenix Man Claims To Have Seen UFO Crash 50 Years Ago!