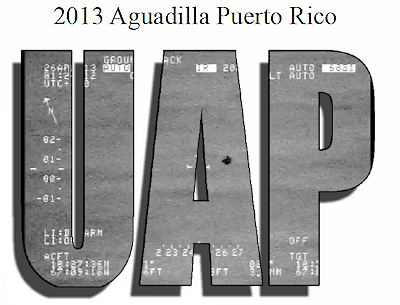 Late last year, the U.S. Naval Research Laboratory, through its in-house Spectra magazine, revealed a drone program designed to convert a flying machine into a submersible platform, and its beta version of a real-life comic book fantasy. This unmanned underwater vehicle (UUV) is called the Flimmer, and the Flimmer was the last best hope an independent six-man research team considered as an explanation for what happened two years ago over Aguadilla, Puerto Rico. But under withering scrutiny, it doesn’t look like the Flimmer has the chops to qualify.

So this leaves us with an extraordinary mystery at the heart of one of the most rigorous scientific inquiries into a single UFO event since the Stephenville case in 2008. And not coincidentally, one of the co-authors of the new report is former semiconductor engineer and Mutual UFO Network Research Director Robert Powell. Powell’s FOIA work with Glenn Schultze on the Stephenville radar records forced the U.S. Air Force to reverse itself back in ’08 and admit that it did, indeed, have jet fighters in the Texas skies at the same time and general location of the UFO, just as eyewitnesses on the ground had insisted.

Assembled by an ad hoc multidisciplinary panel calling itself the Scientific Coalition for Ufology, its focus is a 3-minute 54-second long video clip, and the analysis – which runs 162 pages – is called “2013 Aguadilla Puerto Rico UAP.”A number of things jump out immediately, chief of which is the provenance of the footage. With the assistance of a whistleblower whose name remains confidential, investigators have confirmed the sequence was recorded by a DHC-8 Turboprop under the Command of U.S. Customs and Border Protection. CBP is a branch of the Department of Homeland Security.

In a nutshell: On April 25, 2013, beginning around 9:20 p.m., the Dash-8 crew informed the air traffic control tower at Rafael Hernandez Airport it had spotted a pinkish-red light coming in off the ocean. ATC saw the bogey as well, but couldn’t get an ID because the sucker lacked a transponder. Things got more suspicious when the bogey evidently killed its lights, and that’s when the Dash-8 went into surveillance mode. It switched on a thermal camera with the sort of HD technology that easily paints airborne dope smugglers at night. And then it got weird. Some two minutes into the video (see below), after cruising at treetop level, above oblivious highway traffic, this rascal hit the ocean and continued to surge forward without slowing down, averaging more than 80 mph. The Dash-8 kept tracking the object, its heat signature still visible beneath the water. And that’s when it got really weird.

The thing broke the surface and skimmed it several times, and there’s a flash as the camera operator adjusted the magnification. About 30 seconds into the water sequence, after yet another flashing squint of the optics, the object zipped out of the ocean again. Only, this time it had a twin, tooling along at the same speed. De Void screeched to a halt at this passage:

“A careful frame by frame analysis indicates that the object split in half. In less than one second, the object’s thermal image doubled in size; its center of heat then became bimodal; the object then split into two halves. The process appeared similar to mitosis observed during cell division with the splitting of the nucleus, the expansion of the cell, and the final separation into two cells.”

“Cell division – that was my gut feeling,” says Powell. “As I was color-coding the (pixel intensity) numbers, this heat zone separated, just like what we see in cell division. Then two separate objects came out of the water.” There’s possibly even more info one might wring from the images, which the Dash-8 acquired via its Wescam MX-15D camera. “But,” Powell adds, “we could not get them to give us any operational documents on their system.”

Even so, the framing in the camera’s video output provided a data bonanza, including the target’s latitude and longitude, altitude, distance, and azimuth heading. The investigative team, which included researchers with degrees in physics and statistics, concluded the somewhat shapeshifting UFO was anywhere from 3 to 5 feet long. Though the mystery traveled at varying speeds, between 40 and 120 mph, and changed directions multiple times – virtually eliminating birds and balloons as candidates – the team could detect no source of propulsion

The whistleblower also provided enough info to independently verify the plane’s location on said date through FOIA documentation. And here’s what’s interesting about that: Powell says the Aguadilla records were the last ones released through the 84th Radar Evaluation Squadron before the transparency window slammed shut. Located at Hill AFB in Utah, 84 RADES had long been an invaluable resource for UFO researchers requesting raw unsanitized radar data in order to study new cases. But in 2014, the Pentagon came up with a new censorship policy to drive yet another nail into the coffin of President Obama’s executive orders for more government accountability. But that’s another issue altogether. De Void has sent a link and a query to the Naval Research Lab about a possible UUV connection to Aguadilla, but I’ll stroke out and eat my shoes if they reply.

Anyhow, the takeaway is a richly detailed detective story, of which De Void has barely scratched the surface here. Antonio Rojas provides a more complete summary at Open Minds, but you really need to read the original report, which is criss-crossed with the sort of trigonometry, graph charts and 3-D modeling that De Void is unqualified to evaluate. In fact, the target audience isn’t armchair quarterbacks like De Void.

“We want to open the door for continued analysis,” says Morgan Beall, the Florida MUFON State Director and environmental consultant who worked with the federal whistleblower and recruited the research team. “We’re inviting people to review our work and repeat what we’ve done. Or maybe find the flaws in it and show us where we’re wrong. That’s how science is supposed to operate.”

Somewhere else, maybe. In America, institutional science doesn’t have the stomach for honest inquiry into The Great Taboo.

PUERTO RICO: Another Report of a UFO Over Major Airport!