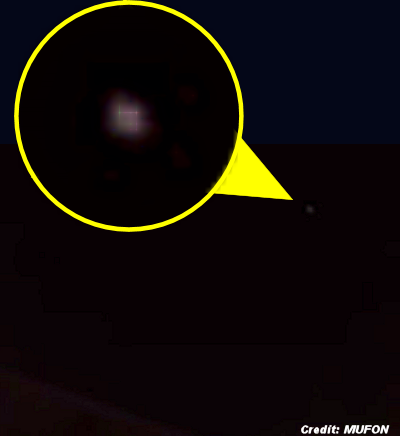 A New York witness at Ronkonkoma reported watching a UFO “the size of an 18-wheeler” under 500 feet and just 500 feet away that stopped and hovered before moving away, according to testimony in Case 68958 from the Mutual UFO Network (MUFON) witness reporting database.

The witness shot video, but only after the object had moved away from the area. The witness was sitting inside his vehicle in his apartment complex on August 4, 2015, but a brightly lit object caught his attention.

“I live by an airport and didn’t think much of it until I saw the colors of the lights,” the witness stated. “I thought they were unusual.”

The witness stepped out of his vehicle for a better look at the object.

“I then noticed it made a complete stop and shut off its light like it didn’t want to be seen. The object backed away from the airport in the same path it came in. Once it got a little distance from the airport its lights came back on.”

The witness then ran across his complex to watch the object leaving the area. …