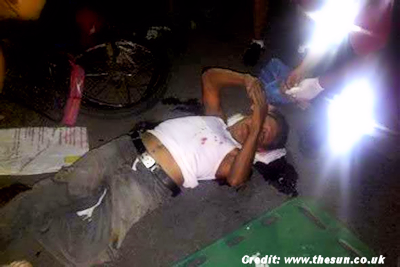 A GRANDAD who suffered head injuries while on a night-time bike ride claims he was avoiding capture by aliens when he crashed into a bush.

Pensioner Francisco Acosta Tostado, 68, says he was riding on a motorway when a UFO knocked him off his bicycle.

Terrified Francisco – who suffered a deep gash to his head in the smash – told police: “Aliens in the craft tried to kidnap me.

“I’m now afraid to go outdoors in case it comes back.”

MY UFO EXPERIENCE: The Abduction of Chris Bledsoe