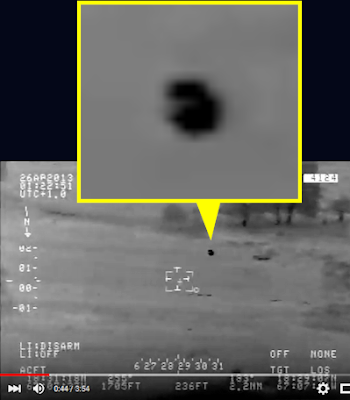 What if – just for the sheer counterintuitive hell of it – “the government” isn’t even interested in UFOs? Or at least, not lately?

Last week, a group of researchers calling themselves the Scientific Coalition of Ufology released its potentially game-changing, 162-page analysis of a 2013 UFO event over Aquadilla, Puerto Rico. What set this incident apart from so much common dreck was the apparent source of the videotape – U.S. Customs and Border Protection, under the Department of Homeland Security. This is an impressive pedigree, maybe even a gold standard. And flightstats.com independently confirmed an insider’s contention that a Fed Ex flight was, indeed, delayed for departure by 16 minutes as the UFO, sans transponder, buzzed nearby Rafael Hernandez Airport.

That last detail put the hook in Dr. Richard Haines, former research scientist with NASA-Ames and founder of the non-profit National Aviation Reporting Center on Anomalous Phenomena. Since 1999, Haines and NARCAP have assessed and published trends on the potentially catastrophic impact of unidentified aerial phenomena (UAP) on air traffic safety, at home and abroad. Given the extraordinary clarity of the Aguadilla video, coupled with the fact that the name-protected whistleblower who leaked the footage appears to be a federal employee, Haines took an arm’s-length approach when he was contacted about the images in 2013.

“Given sufficient motivation, manpower and money, one could create a very realistic hoax here,” Haines conceded in an email to De Void. “However, for a number of reasons, I don’t believe it is a hoax. It does deserve a lot more serious study for what it may tell us about small volume, generally globular (i.e., contained), dynamic, heat-emitting resources.”

Still, Haines’ main reservations weren’t over authenticity. His foremost concern was whether or not the footage involved classified material. After all, if this is what it appears to be – i.e., a single flying object, averaging 80 mph after plowing into the ocean, then splitting into two separate flying objects as it emerged from the water – it seems pretty obvious that a federal agency has documented evidence of some extraordinary technology. If it’s one of ours, is this how Uncle Sam would want to put the word out there? Via UFO researchers? Really? And if it’s stealthy hardware from, say China, would we want them to know we know?

“[Restricted access] has still not been determined by anyone as far as I know,” states Haines, “and that is one of the reasons we (NARCAP) did not proceed with any more than a cursory examination of the video long ago when we first learned of it. We wanted to (and still want to) play by the rules, so to speak, in this regard considering that it might have been classified information.”

But if Morgan Beall’s confidential source is correct, the bureaucrats just don’t give a spit.

“According to our witness,” says Beall, the Florida State MUFON director who coordinated the investigation, “Air Force intelligence kicked it back down, said ‘We don’t know what it is,’ and said to call the 800 number of a civilian research organization. Actually there are two to three witnesses, and when there didn’t appear to be any interest from the upper echelon, their attitude was, well, does that mean we’re free to talk about it? And that’s when the leaks started.

“We’ve all heard stories about eyewitnesses being threatened and told to keep quiet or else. But those are largely historical cases, and from the ‘90s onward we’re not hearing that from anybody at all. And I think that’s probably a smarter way to handle it, just deny you’re interested.”

SCU team investigator Richard Hoffman suspects the Aguadilla video trickled into the public domain as “more of a mess-up than anything else.” An IT engineer contracting with U.S. Army Materiel Command at Redstone Arsenal in Huntsville, Ala., Hoffman blames the leak on a “lack of clear guidance” on what to do with UFO reports that might emanate from government agencies. Unlike a number of South American and European nations, the U.S. has had no official institutional system for processing UFO data since 1970. “Whether it was passed up the chain of command or if it just stayed with Customs, I don’t know,” he says. “My concern is that someone with DHS is going to spank someone from Customs for letting it get out there.”

A student of the phenomena since he was a teenager growing up in Ohio, Hoffman says he’s been waiting a lifetime for evidence of this caliber to emerge. He once interviewed an Air Force pilot who told him he shot gun-camera footage in pursuit of a UFO, only to have it confiscated and vanish down a black hole. Now, it’s as if Customs and Border Protection just delivered the goods on a silver platter.

“I’m almost doing pole vaults, I’m so excited about it,” says Hoffman. “There’s never been a single case that’s been so thoroughly studied. In two and a half minutes, we have an object that breaks two laws of physics. And we’ve got infrared video, we’ve got radar, we’ve got the kind of technology and built-in metrics you just can’t get from eyewitnesses alone. We’ve done the science, we’ve done the math. We’ve posted it, and we want more input.”

So did Customs screw up? Or DHS? Or could it be that administrators at either agency really don’t care that on the evening of April 25, 2013, a state-of-the-art airborne camera did its job and gathered evidence of a flying machine demonstrating unprecedented performance capabilities?

Scientific Coalition for Ufology and The Analysis of FLIR UFO Video