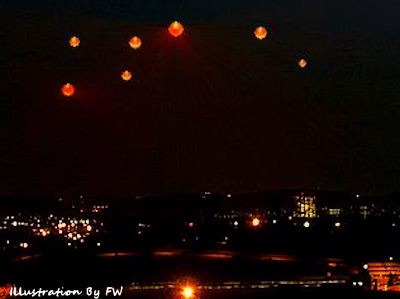 They had just returned from a mud run and never expected to see orange-red UFOs!

A couple weeks ago on July 25, a couple of Clinton, NY residents had just participated in a mud run. Tom’s wife Peggy had gone inside their residence, when Tom’s attention was captured by a group of orange-red UFOs. He stopped to take a closer look and thought the occurrence was most strange.

“They were flying in a diamond formation,” Tom said. “But then, even more odd, they were closely followed by another group of three orange-red UFOs flying from Southeast — northward at about 20-30 degrees above the horizon.”

Tom called his wife back outside to witness what he was seeing. …