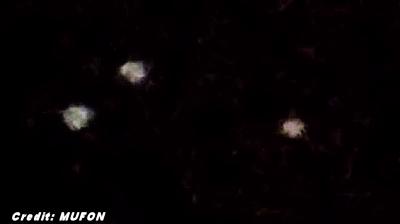 A North Carolina witness at Concord with a military background reported watching and photographing a triangle-shaped UFO with three white, pulsating lights, according to testimony from Case 66771 from the Mutual UFO Network (MUFON) witness reporting database.

“I saw a triangle-shaped aircraft with three white, pulsating lights hovering – and then moving slowly northeast and then the lights went off and the craft disappeared.”

The witness has a military background.

“I’m a former navy rescue, so I know all about aircraft warning lights and I’ve never seen anything like that in the military.”

The video shows what appears to be three white, blinking lights at three corners of the craft. The witness also provided one still shot of the object. …