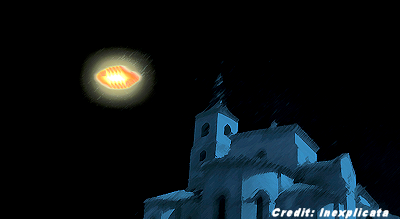 As a result of having published a report last week involving three sightings in the state’s coastal region, I received two phone calls from people in the city of Merida who saw what they believed to be UFOs in the Cordemex and Francisco de Montejo districts, both located to the north. These are the reports from Mr. Mario Cetina Alcántara and Rebeca Martínez Pérez, who do not know each other, but who did see very similar unidentified flying objects with a day’s difference between them.

Mr. Mario lives in the fourth stage of Francisco de Montejo. His home almost borders the northern Periférico (beltway), and he says the following: “Last Friday I went to pick up my son from football practice. It was nearly eight o’clock at night and when we stopped by the main avenue to do some shopping, I don’t know why I suddenly turned to look at the sky. At first I saw what I thought was an airplane, but upon looking closely, I notice that it zig-zagged and that its speed varied, thus dismissing any logical explanation. My son (age 23) also saw it and was startled. In fact, it was he who urged me to contact your column and make it known,” he said.

While he did not furnish any additional details, it is striking that his report is very similar to the one given to us by Mrs. Martinez in a case that occurred on Saturday – that is to say, a day later – and practically at the same time:

“I was hanging out the washing in my back yard. I have the habit of looking at the moon. I’ve always enjoyed seeing it and this time, when I looked at it, I saw a strange object, like a craft making “u” or “z” shaped turns. It speeded up, and then slowed down.” She adds: “I was startled, nearly agape, and since I was home alone I didn’t even had the chance to call my husband or my daughters to see it. I know that perhaps many will consider me deranged, but I’m sure about what I saw. It struck me, as I’ve always heard stories about UFOS and had never seen one. I always said I would believe it when I saw it, and now I finally have,” she concluded.

Moreover, Alejandro Vega and Manuel González, organizers of the “Alerta Ovni” (UFO skywatch) contacted us to say that the fourth installment of this event has already been organized and is scheduled for the month of September, tentatively Saturday the 17th, from 21:00 hours onward. As with previous skywatches, they shall be held simultaneously in several municipalities, mainly in Yucatán, but the presence of [the states] of Campeche and Quintana Roo is also expected. We shall have more information about this event for you next week. It has been held with great success in its three previous installments, with over 200 people participating for each skywatch.