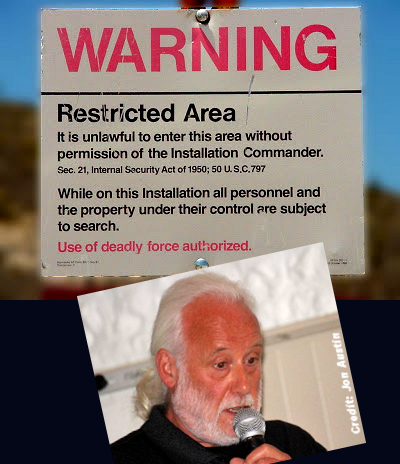 A CHILDREN’S author claims to have been abducted by aliens at the notorious Area 51 military base and warned by the crew of a UFO that landed at UK paranormal hotspot Warminster that the world could end.

Mike Oram who has penned the kids’ books The Strange World of Jimmy Hayes and The Zen of Ben claims he and wife Fran Oram were “taken” when they visited the mysterious US military top secret base Area 51 in Nevada.

He claims to have “lost” about two hours, and later under regression – when “an abductee” is hypnotised in order to remeber the experience – discovered the pair were taken through by sinister military-dressed beings through a “portal” to another dimension and experimented on in a bizarre medical suite.

But his space brother came at the eleventh-hour and ordered their captors return them to their vehicle. […]

Intrusion into Top Secret Area 51 Base Caught on Camera | VIDEO