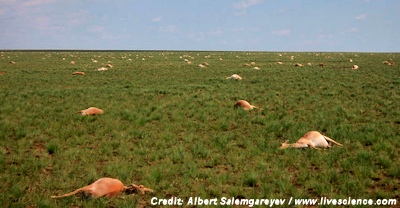 It started in late May.

When geoecologist Steffen Zuther and his colleagues arrived in central Kazakhstan to monitor the calving of one herd of saigas, a critically endangered, steppe-dwelling antelope, veterinarians in the area had already reported dead animals on the ground.

But within four days, the entire herd — 60,000 saiga — had died. As veterinarians and conservationists tried to stem the die-off, they also got word of similar population crashes in other herds across Kazakhstan. By early June, the mass dying was over. [See Images of the Saiga Mass Die-Off]

Now, the researchers have found clues as to how more than half of the country’s herd, counted at 257,000 as of 2014, died so rapidly. Bacteria clearly played a role in the saigas’ demise. But exactly how these normally harmless microbes could take such a toll is still a mystery, Zuther said. […]