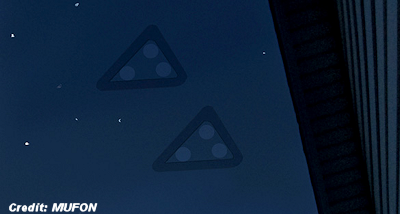 An Ohio witness at Mayfield Heights reported and illustrated two triangle UFOs that moved overhead side-by-side silently without any lighting, according to testimony in Case 69953 from the Mutual UFO Network (MUFON) witness reporting database.

The witness and his wife were outside on a front porch about 11 p.m. on August 15, 2015, on a clear night with stars visible when the objects were first seen.

“I’m 54 years old, sane and sober,” the witness stated. “I was staring up at the sky, not seeing any meteors and just relaxing. There’s no roof on my porch; it’s like a deck. Suddenly over my right shoulder, and over my house, I see two very dark objects moving silently over my street, then over the houses across the street and then disappearing into the northwest.”

The witness immediately pointed out the objects to his wife.

“My wife, who has bad night vision, couldn’t see what I was pointing at. The objects were very dark, almost silhouettes. They blocked out the stars as they passed. That’s why I knew I wasn’t seeing things. I couldn’t figure out how high up they were or how big they were. […]”