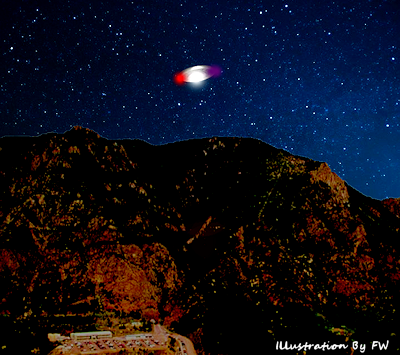 A Colorado witness at Colorado Springs reported watching a UFO with unusual lights flying straight toward the North American Aerospace Defense Command (NORAD) about 9:30 p.m. on September 4, 2015, according to testimony in Case 70163 from the Mutual UFO Network (MUFON) witness reporting database.

The witness and friends were sitting outside when the object was first seen.

“We all saw something with white, red, and purple lights flashing,” the witness stated. “It was low in the sky was traveling northeast to southwest.”

The group recognized where the object was heading.

“It flew straight towards NORAD – right over southern Colorado Springs and Fort Carson Army Base. The colored lights were not like anything I have ever seen on any type of aircraft.”

The witness stated there was unusual traffic in the sky too.

“About 20 minutes before seeing the lights, there were four black helicopters in the same area. They flew off before we saw the lights flying overhead. About five minutes after we saw the lights, a large military airplane flew over heading along the same path. The large airplane turned on a smoke trail behind itself. The smoke hung in the air for about 30 minutes before it dissipated.” […]