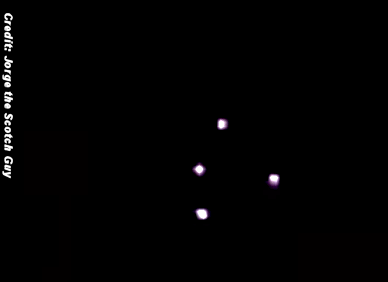 What was that in the skies over San Diego?

Mar Vista High School Sophomore Garret Conder was watching the Chargers game with his family last Thursday night, Sept. 3, when at approximately 8:10 p.m. his older brother Robert Peraza yelled from outside “You guys got to see this.”

Conder described what happened next: “We all ran outside. It was the most credible piece of UFO evidence I had ever seen. In the south east sky it was a diamond shaped object. Goldish-yellow lights. Very bright, not blinking like aircraft lights. I’ve never seen anything like it. My jaw dropped. I was flabbergasted. The lights were in a weird formation, flying above and below each other. […]

Conder, speculating that it might be of an extra-terrestrial origin, immediately turned to social media, “Tweeting” to the world what he had just witnessed. Others responded that they had seen the same thing, some posted pictures, one person with the screen name @BigKidGeorge from National City posted a short video clip. […]