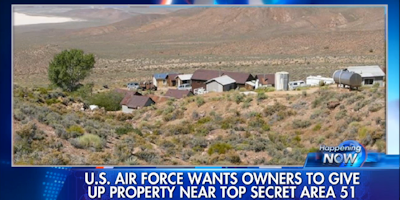 A decades-long dispute between a Nevada family and the Air Force over private land the military wants to acquire near its top-secret Area 51 site is headed to federal court, after the owners said they were low-balled with a $5.2 million offer.

The Sheahan family, whose claims to the 400-acre mine property date back to 1889, says the offer should be closer to $29 million, with each side giving conflicting accounts of the negotiation.

“They never really intended to make a fair offer to us,” Ben Sheahan, whose family owns the Groom Mine, recently told Fox News.

The Air Force says it could have offered more money had the Sheahans allowed them to inspect the southern Nevada desert property — an argument family members dispute. And they say the Air Force went to Congress to condemn the property before the first meeting.

The deadline to accept the federal government’s offer was Thursday. With the family rejecting it, the Air Force is now trying to get a federal court to condemn the property and compel a $5.2 million sale. […]

Watch the latest video at video.foxnews.com