A powerful 8.3 magnitude earthquake followed by a series of strong aftershocks has struck off the coast of central Chile.

Authorities have issued tsunami warning for the area, urging people along the coastline to evacuate. “Based on the preliminary earthquake parameters … widespread hazardous tsunami waves are possible,” the Warning Center said, adding that greatest danger was for Chile and Peru. 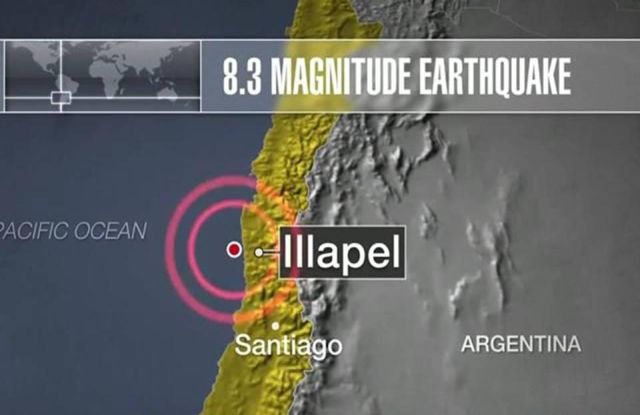 Tsunami waves “along some coasts” of Chile could reach more than three meters above the tide level, PTWC warned.

In Ecuador and Peru waves of up to one meter are possible.

ONEMI reports that so far no of injuries or deaths have been confirmed. No disruption to basic services or infrastructure has yet been reported.

Chile’s National Office of Emergency of the Interior Ministry says it has cancelled the Tsunami Warning for the Magallanes Region only. Alerts for the rest of the national coastline remain, as the office is urging people not to return to their homes until they are told do so.

Coquimbo Mayor Cristian Galleguillos told CNN Chile the city was starting to see flooding and that 95 percent of the city had lost electrical power.