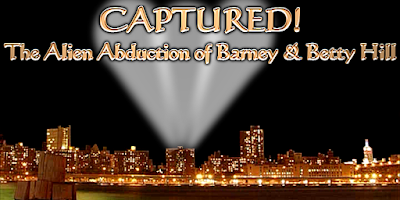 Variety reports this week that a classic true-life alien abduction story is to receive the full Hollywood treatment in Captured. Gotham/Principal, producers of Maze Runner: The Scorch Trials, will team up with Bryce Zabel and Jackie Zabel of Stellar Productions to tackle what is arguably the most famous case of its kind on record.

Captured will be based on the story of Betty and Barney Hill, an interracial couple from New Hampshire, who claimed to have been taken aboard a UFO and medically examined by its humanoid occupants in September 1961.

Bryce Zabel, a former CEO/chairman of the Television Academy, and Co-Creator of NBC’s Dark Skies TV show (1996-1997) will write the screenplay based on the 2007 non-fiction book Captured! The Betty and Barney Hill UFO Experience: The True Story of the World’s First Documented Alien Abduction,

by Stanton Friedman and Kathleen Marden.
This is not the first time Hollywood has engaged with the Hill abduction story. It was notably adapted for television in 1975 as The UFO Incident, a feature-length movie starring Estelle Pasrons and James Earl Jones as Betty and Barney. Bryce Zabel is also no stranger to the story, having already incorporated it as a sub-plot in his Dark Skies series….

Captured will no doubt differ substantially from its 1975 TV treatment, with the producers planning to “make the film in a context of both Cold War paranoia and the country’s struggle over race relations.”

“They were an interracial couple in a country that still had segregation laws, and they lived in a city that was next door to a bomber base bristling with nuclear weapons. What they knew and why they were targeted will make for a phenomenal film.”

Co-producer Eric Robinson said of the project: “Captured is a true story that explores the birth of modern UFO lore through the eyes of the first Americans to report that they were kidnapped by aliens,” adding, “This is an exciting story that is as intriguing, timely and ripe for adaptation today as it was 54 years ago when this incident occurred.”

Bryce Zabel, who has had a professional fascination with the UFO mystery since the 1980s, wrote Syfy’s first original film – the UFO conspiracy story Official Denial (1993), and, after Dark Skies, worked on the development team for Steven Spielberg’s epic abduction miniseries, Taken. He has since written a number of books exploring UFOs and politics, including Surrounded by Enemies: What if Kennedy Survived Dallas?

which won the 2013 Sidewise Award for Alternate History.