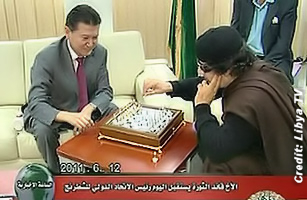 “They came in a flying saucer, picked me up, and I spent a whole day in outer space.”

When Kirsan Ilyumzhinov wakes up every day, perhaps he wonders if this will be the day when his extraterrestrial friends will return to bestow new, earthshaking secrets of the universe on him.

That’s right, you read it correctly — his ET friends. And this isn’t even a new revelation about the 53-year-old former president of the Russian republic of Kalmykia.

His background and position on UFOs and ETs will undoubtedly bring Ilyumzhinov under fresh scrutiny — he’s reportedly considering running for president of FIFA, the international governing body of football. […]

“A Self-Proclaimed Emissary of Alien Life . . . in Tripoli for a Meeting with Muammar Gaddafi”