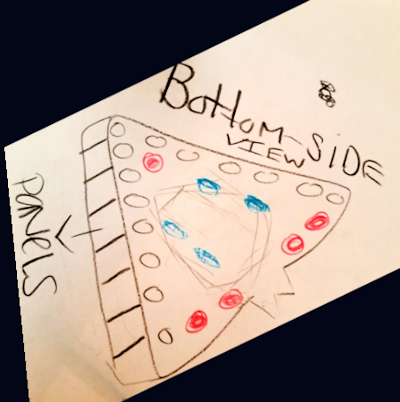 A California witness at Livermore reported an “enormous” dark triangle UFO that moved overhead and quickly disappeared, according to testimony in Case 70520 from the Mutual UFO Network (MUFON) witness reporting database.

The witness and her boyfriend were traveling along I-680 about 11 p.m. on September 14, 2015, just passing the 84 exit, when the object was first observed.

“Sitting in the passenger seat I noticed bright lights, red, blue and lots of white,” the witness reported. “I leaned forward and started to observe it for a quick second noticing the craft was 3-D like and triangular in shape. The white lights outlined the shape of the craft.”

The witness had never seen anything like this in shape or size.

“I second guessed myself and started to lean back. I took a quick glance at my boyfriend and realized he was looking at the same thing. I quickly looked back and within seconds the object blinked about three times (pulsating). When I thought the lights were going to blink again it vanished!”

The witness says she was in shock over what she saw. […]

MY UFO EXPERIENCE: Triangular Shaped UFO Puts on Light Show Over I-5