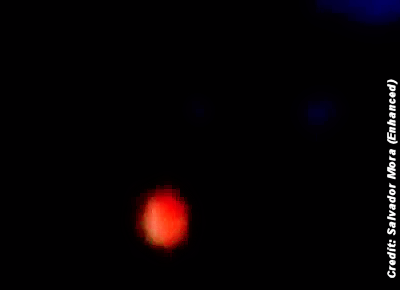 Our friend and colleague Arq. Claudio Mora of Mexico’s La Esfera Azul is sharing two recordings of unidentified flying objects (UFOS) with eyewitness accounts. These sightings took place between the months of July and August 2015 over Morelia, the capital city of the Mexican state of Michoacán. Footage of the red UFO – the first one in the video clip – is from August 2015, recorded by Manuel Rivera Oviedo. The second UFO was recorded “moments after the recordings followed by the eyewitness accounts” in the direction of the Morelos Stadium. The original video is credited to Geovana Estrella Núnez, with post-production by Arq. Mora himself.