Hillary Clinton presidential campaign chairman John Podesta tweeted his approval of a recent interview with Clinton by Lena Dunham, and in the tweet he encouraged Dunham to ask Clinton about aliens next time. 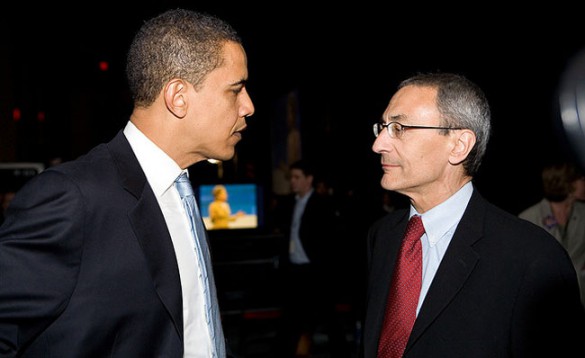 Dunham’s interview was posted in her new email newsletter called Lenny. It is in collaboration with her  colleague Jenni Konner, who co-produces and co-writes the television show Girls with Dunham. The interview with Clinton has nothing to do with aliens, but apparently Podesta wishes it had.

It is not a secret Podesta is a UFO enthusiast and a big fan of the television program The X-Files. He allegedly even had an X-Files themed birthday party at the White House when he was Bill Clinton’s Chief of Staff.

Even more shocking was when Podesta participated in a press conference at the National Press Club in Washington D.C. about the importance of the U.S. government declassifying UFO files. He stated: “It is time for the government to declassify records that are more than 25 years old, and to provide scientists with data that will assist in determining the real nature of this phenomenon.”

This is also not the first time Podesta has tweeted about the truth being out there. In fact, his last tweet on the topic spawned several news stories. That tweet came in February as he was leaving his last job as Counselor to President Obama.

The same day that he tweeted: “My last day as Counselor to President Obama. It’s been a tremendous privilege to serve a great President and the country for this last year,” he also tweeted:  “1. Finally, my biggest failure of 2014: Once again not securing the #disclosure of the UFO files. #thetruthisstilloutthere cc: @NYTimesDowd”

Although Podesta is a UFO enthusiast, many felt that his February tweet was made as an inside joke. And with the latest tweet, the question is, if Hillary was asked about aliens, would she have anything to say?

Hillary is actually not a stranger to the topic. It is well known among UFO researchers that her husband, former POTUS Bill Clinton, was also a UFO enthusiast. According to his friend Webster Hubbell, Clinton asked Hubbell to be on the lookout for UFO secrets when he sent Hubbell to the Attorney General’s office as the Associate Attorney General in 1993.

Most recently Clinton talked about this interests in UFOs on the Jimmy Kimmel Live TV show.

During his presidency, longtime friend and supporter Laurance Rockefeller, also a UFO enthusiast, was pressuring the Clintons to begin official investigations on the topic. Presidential UFO researcher Grant Cameron obtained files from the Clinton Library that show Rockefeller was discussing his ideas and sharing information on UFOs with Hillary in hopes that it would prompt the President into initiating an investigation. More can be read in the files which can be downloaded here: Hillary Clinton UFO Files. 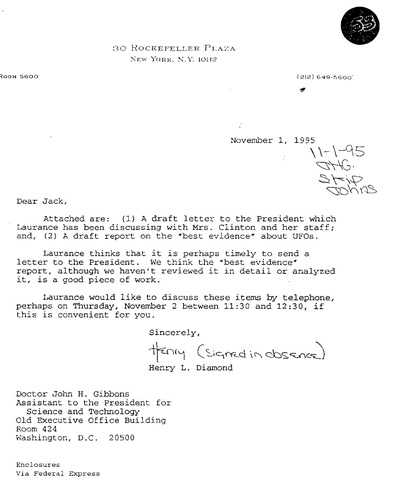 Hillary has not commented on what she believes regarding UFOs and aliens, nor has she discussed her conversations with Rockefeller. Interestingly, one of the images of Hillary with Rockefeller sent to Cameron from the Clinton Library shows the two walking in Rockefeller’s ranch in Wyoming with Hillary carrying a book on aliens.

Recently, in response to a Mother Jones UFO story apparently inspired by Podesta’s February tweet, Hillary’s then “non-campaign” – referring to themselves as such because it was prior to her official campaign launch – did comment on extraterrestrials.

They wrote Mother Jones via email: “Our non-campaign has a strict policy of not commenting on extraterrestrial activity… BUT, the Truth Is Out There.”

At one point Hillary will most likely be asked a UFO question directly. Perhaps her team has already come up with a canned response. It might even include teasing Bill for his interests. Only time will tell, but as long as she stays in the spotlight, the question will come, especially if she makes an appearance on Jimmy Kimmel Live.