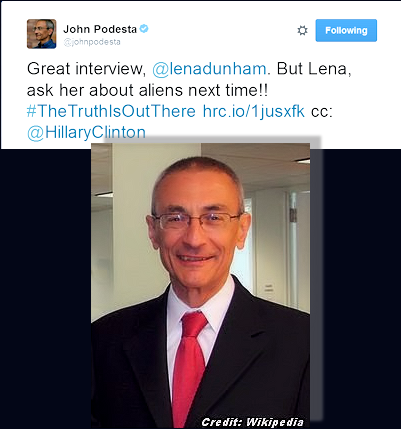 Hillary Clinton presidential campaign chairman John Podesta tweeted his approval of a recent interview with Clinton by Lena Dunham, and in the tweet he encouraged Dunham to ask Clinton about aliens next time.

Dunham’s interview was posted in her new email newsletter called Lenny. It is in collaboration with her colleague Jenni Konner, who co-produces and co-writes the television show Girls with Dunham. The interview with Clinton has nothing to do with aliens, but apparently Podesta wishes it had.

John Podesta: Pulling Back the Curtain on UFOs