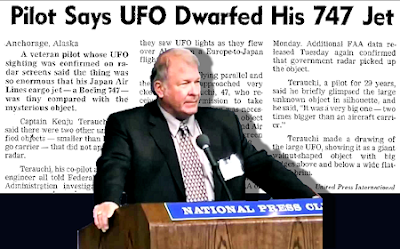 By anyone’s measure, the skies of Alaska were visited by something extraordinary during the evening of the 17th of November, 1986. Flight 1628, Japan Airlines had front row seats. Very briefly, for 31 minutes, three UFO’s of varying forms were witnessed by a flight crew of three, as well as ground-based air traffic controllers watching primary radar display screens. Hundreds of pages of authorized, officially released records appeared in the public domain within months of the event. Furthermore, John Callahan, Federal Aviation Administration (FAA) Chief of Accidents, Evaluations and Investigations came forward in 2001 with far more to add to the story. The question I have attempted, in the last four months, to answer is whether John Callahan did indeed head the FAA roles he has always claimed; and, if so, how can we verify those claims, and to what degree of satisfaction. As this is Part 2 of this series, for anyone not up to speed, I would encourage them to appraise Part 1, which can be found here.

On 19, 2015, after lengthy email exchanges, Callahan posted to me an impressive 51 pages of resume material and official FAA employment documents which detailed his entire career. What surprised me the most was that these records were not copies, but originals. These were old – the paper, the ink, the rubber stamping – certainly none of it was thrown together recently. Space and time restrict me from displaying the entire 51 page file here, but I will most certainly present some of the more important pages. For example, Callahan provides us with a mulit-page Federal Office of Management and Budget “Form 171”. On the Personal Qualifications Statement continuation-from-page-1 sheet a section titled “Name and address of employer’s organization” resulted in a type-writer entry of “FAA ATS-1 Washington Headquarters”. The box to the right of asks for “Dates employed (provide month and year)” to which was answered “Oct. 1986 to present”. Most importantly, a third box asks for “Exact title of your position”. The phrase “Division Mgr. Investigations/Evaluations” answers this section, and thankfully so. “Name of immediate supervisor” is entered as “Harvey B. Safeer”. The actual page itself is here: 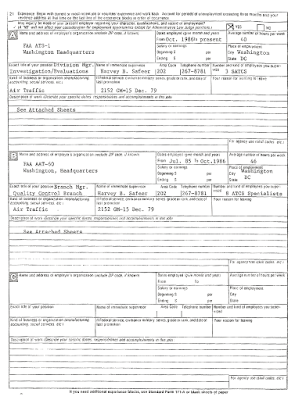 Confused yet? To simplify all this, I highlight his “FAA Headquaters Experience” page of his lengthy resume. The top few line items read:

Below is the copy of this page. 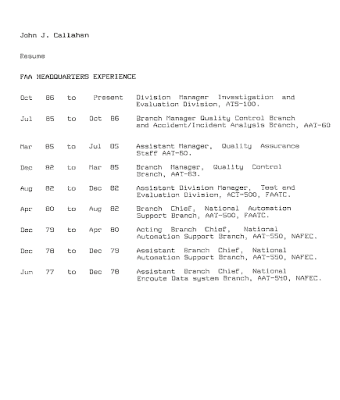 So, to sum up, in a two year period, Callahan had run both the “Accidents/Incident Analysis Branch” and the “Investigation and Evaluation Division”. Critically, this period was from July 1985 to after the beginning of 1987 – which is precisely when the JAL 1628 incident occurred. One may ask why Callahan never made any of this clearer in the various documentary appearances and conference presentations he has been a part of. Obviously, to list the above position titles in full is not what listeners or viewers quite need to hear. The general notion that he was managing multiple areas of critical FAA officialdom in a very short period of time is more than enough. However, two things were entirely new news to me. Keen readers may have noticed that his “Accidents” Branch was actually titled “Accident/Incident Analysis” Branch, and, while managing it he was also managing the “Quality Control Branch”! Much of this is mere semantics, but it does make clear the exact nature of the roles and responsibilities Callahan had in this 1985 to 1987 time period.

More specific than the above imaged list of roles, another page in Callahan’s resume contains a full paragraph of summarised roles he held going back to the late 1970’s. This page acts as a cover sheet to a dozen pages of far more detailed position duties and role responsibilities, and the core of it matter-of-factually reads:

Here it is, imaged from John Callahan’s resume material: 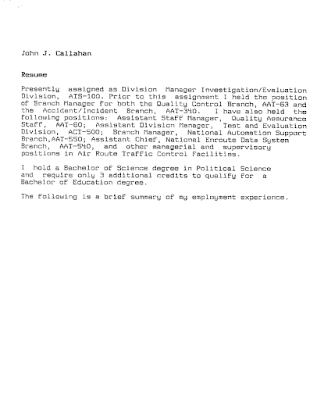 To sum up, there are over 50 pages of material similar to what I have been able to present here. As stated before, Callahan sent me the original file, and it held up to scrutiny. So armchair sceptics can move on to greener pastures, because the providence of John J. Callahan is firmly and finally established. So does any of this matter? I argue that it matters enormously. Testing the credentials of someone directly involved with one of the most potent UFO cases in history is surely of great significance as we painstakingly continue to compile the history of the UFO matter for future generations. Possibly of greater importance is that it may encourage other high ranking officials to also come forward and risk disclosing their role in the UFO matter. Of course, none of this solves the actual case. I often wonder what became of pilot Kenji Teriuchi. Maybe one day we will know what engaged his aircraft that night, and he, and John Callahan, can be vindicated.