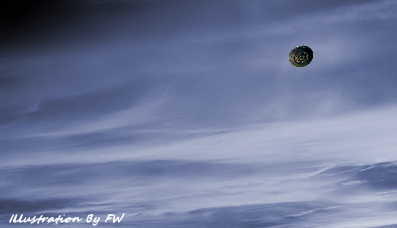 On Sept. 28, 2015, a couple from Syracuse witnessed a gray, circular UFO. Ethan and his wife, Shemlynn, were driving on Interstate 81 south and were about nine miles south of the Watertown exit. The couple said that the sky was overcast, with little sunlight still out.

“All of a sudden, Shemlynn pointed out a gray mass in the sky,” he said. “The UFO was circular shaped, and it came twisting out of the clouds for about 5-10 seconds, then receded.”

Shemlynn said that when the UFO came out of the clouds, it seemed unstable or like it was experiencing turbulence.

“The UFO had was making an almost twisting motion.” she said.

Ethan said that the surface texture seemed rough and first took it to be a meteor. The craft then receded to the clouds. The event lasted about 5-10 seconds.

The couple said that the UFO had no lights and was certainly not a weather balloon, as it was much too large. They added that it was not a conventional aircraft. […]