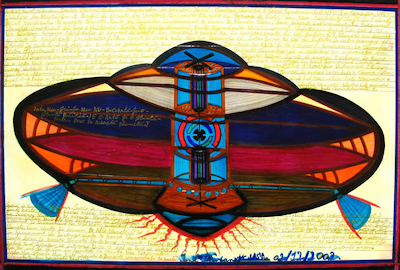 Ionel Talpazan thought he saw a UFO when he was a boy, and never stopped seeing them. Of course, he created them.

Ionel Talpazan was 60 years old when he died this week, of diabetes and stroke. He was a boy in a small village in Romania, given up by his parents and raised by a succession of foster parents. He told interviewers he escaped into the woods one night because he thought he would be beaten.

He saw a blue, beating light in the sky above, and was sure it was a spacecraft.

Ionel began to draw spacecraft; I’m not sure you can call them UFOs when an artist gives them such a vivid, colorful identify.

By the time he died, his works had hung at the American Visionary Art Museum, and museums in San Franciso, London, Berlin, Madrid, and France. Talpazans were sold in fancy galleries from Soho to Chelsea. […]

ART, LIFE AND UFOs A memoir by Budd Hopkins