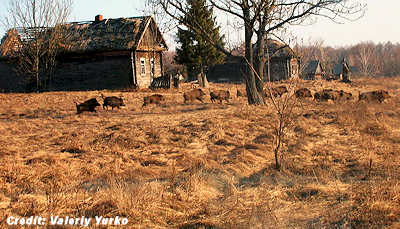 In a wide departure from the notion that Chernobyl’s exclusion zone is an inhospitable, desolate tundra, researchers have found animal populations are actually thriving in the region, no longer burdened by humanity’s impact.

The area has been uninhabited since the 1986 meltdown of the Chernobyl Nuclear Power Plant, which killed 31 people and forced all residents to evacuate from more than 1,000 square miles. But a new study published Monday in the journal Current Biology found flourishing numbers of large wildlife, including wolves, elk, foxes and wild boar, inside the Belarusian part of the exclusion zone.

“Within the exclusion zone there’s evidence of wildlife everywhere,” said James Beasley, a researcher at the Savannah River Ecology Laboratory and co-author of the study.

The findings come with some striking statistics. […]