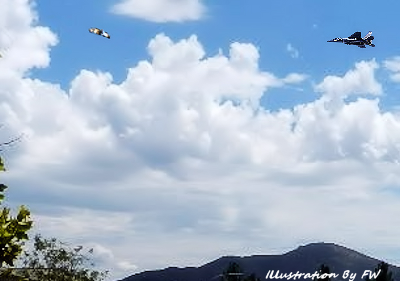 A California witness at Winchester reported watching a jet apparently chasing a cylinder-shaped UFO on October 1, 2015, according to testimony in Case 71102 from the Mutual UFO Network (MUFON) witness reporting database.

The witness was at home in her kitchen and felt “loud booms.”

“I asked my husband if he heard them,” the witness stated. “The television was on. He said he didn’t. I went outside, and to the east, over the San Jacinto Mountains, the sky had very high cloud formations that drifted toward the south and thinned out. The rest of the sky was very blue, the bluest I’ve seen in long time. The clouds were all swirling around. The eastern thicker ones looked like waves and as they drifted south swirled around each other. It was really very beautiful. I could still hear and feel the booming sound.”

The witness continued watching the sky.

“I noticed a dark object chasing, or following, a very bright object. I squinted my eyes and then could see that the dark one was a plane or jet. I could see the wings, tail, etc. against the white clouds. The other object I could see no detail of its shape. I mean, no wings or tail – it was sort of cylindrical, like the fuselage of the jet, but only about half as big. It was very bright though and showed up clearly against the clouds. The jet was just about alongside of this object.” […]