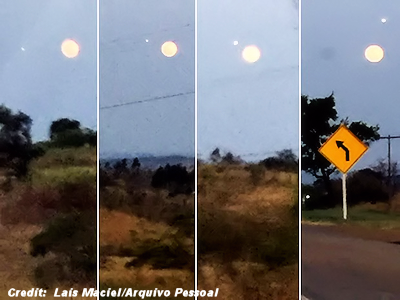 Last week’s astronomical event known as the “blood moon” created a sensation on social media, with thousands of related photos and messages. It is a relatively frequent phenomenon, occurring every 15, 16, 17 or 18 years. The last supermoon occurred on the 27th of September of 2015, making it 14% larger than it is usually seen, and also coinciding with a full lunar eclipse. The next event will occur in the year 2028 or 2029. However, there was a strange link between the event and the manifestation of unidentified flying objects. Fortunately , it was possible to secure some visual evidence.

A sequence of photographs taken in Brasilia (Brazil) shows an unidentified flying object near the supermoon on Sunday evening (the 27th). The photos were taken from Engenho das Lajes, Federal District, as from 18:00 hours.

According to civil engineer Viviane Taham, the object was shiny and moved in different directions. “It appeared to the left, elevated itself in a diagonal direction, then descended diagonally, and finally returned as if headed toward the moon before finally disappearing.”

A total of 21 photographs were taken casually by the her daughter, who wanted to capture the full eclipse of the moon on her cellphone. The young woman was inside the vehicle with her father and two other people. Everyone was impressed by what they were seeing.

“My daughter phoned me at the time and said: “I saw a UFO!” and I told her no, that she had seen a light and we didn’t know what it was. “Its movement was odd,” Viviane added.

“I don’t know whether I believe in aliens or not. I had never considered such a possibility. I never saw anything like it,” said the engineer.The Brazilian Air Force was consulted to see whether any official records on the event could be found, but no official reply has been received up to now.

In Campo Grande (Brazil), George Tamaras obtained one of the more impressive pieces of evidence. His video displays the transit of a UFO during the supermoon.It was a ball of white light and it glowed intensely. The likelihood of the object having been an airplane was removed by the UFO’s lack of a definite position.

A witness in Buenos Aires (Argentina) also managed to record the astonishing astronomical event, being able to capture the exact moment at which several unidentified objects appeared on the scene.

“Last night, some objects were seen crossing [the moon] during the eclipse, and many people following the event on the TV claimed seeing a shooting star. It is clear that this was not a meteorite or anything similar. Rather, these were elongated bolides, like cigar-shaped UFOS. At least that’s what my recording shows,” said the witness.