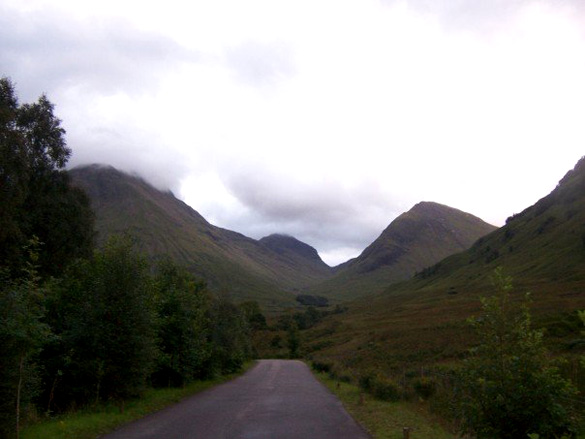 The witnesses were driving home and were two miles east of Glencoe Village about 9:40 p.m. on September 29, 2015.

“My friend noticed what firstly appeared to be a very bright white light heading west towards us at a rather slow speed,” the reporting witness stated. “I found this strange as it is not an aircraft flight path so we assumed it was a helicopter – but as we continued to approach each other the one white light soon became three in the shape of a perfect triangle.”

At this point the witnesses were certain they were not looking at a helicopter. 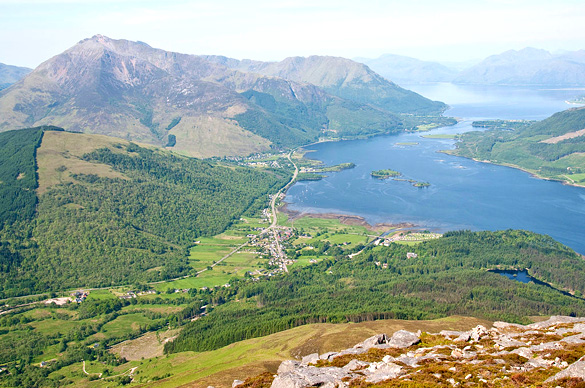 Glencoe Village from the summit of the Pap of Glencoe. (Credit: Wikimedia Commons)

“As it continued towards us at a steady pace the three lights intensified in brightness to almost blinding.”

The witness then stopped his vehicle with mountains on both sides and began to flash his headlights at the object.

“We both put our windows down and could hear no sound, but as I continued to flash my lights the craft was now almost overhead. It stopped and made an unbelievable left turn – not a sweeping turn. The now visible triangular craft – dark in color – turned on the spot and headed off north. The three white lights went off and three dimmer red lights started to flash and it unfortunately disappeared out of our sight due to the close proximity of the mountains.”

The witness pointed out that the weather was good. 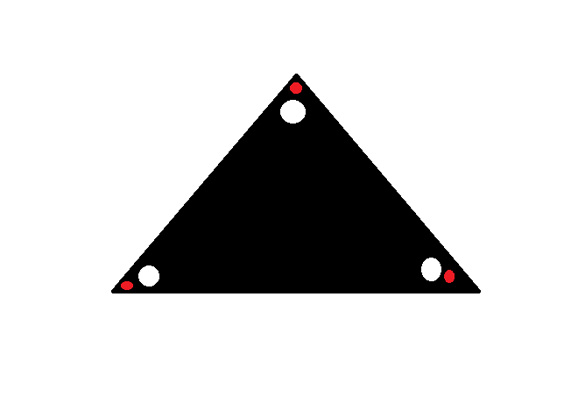 “I would like to add that the skies were clear and a bright full moon was visible and its shape was easily identified on the moonlit sky. I can categorically say this was no aircraft I have ever seen making such maneuvers with no sound. I would estimate it was roughly 200 to 300 feet up and each side roughly 80 to 100 feet. My friend said it was as if they saw us – stopped to look – and turned away from us. Quite unbelievable.”

British MUFON Field Investigator Clair-Joanna Alpaltun is investigating. Please remember that most UFO sightings can be explained as something natural or man-made. The above quotes were edited for clarity. Please report UFO activity to MUFON.com.