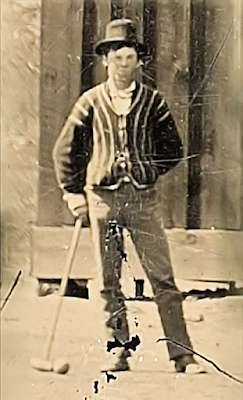 FRESNO, Calif. (KFSN) – A photo bought for $2 in a Fresno shop has been described by a Western Americana expert as “The holy grail of photography.”

It is believed to be just the second photo ever seen of William H. Bonney. The infamous outlaw “Billy the Kid” is actually playing croquet in the picture. […]

Jeff Aiello is executive director of a new documentary titled “Billy the Kid – New Evidence.” It weaves a historical timeline around the discovered picture. Aiello is a former ABC30 Creative Services Director. He said, “This is the first photograph ever discovered of Billy the Kid with The Regulators, period. And that’s significant in American history.” […]