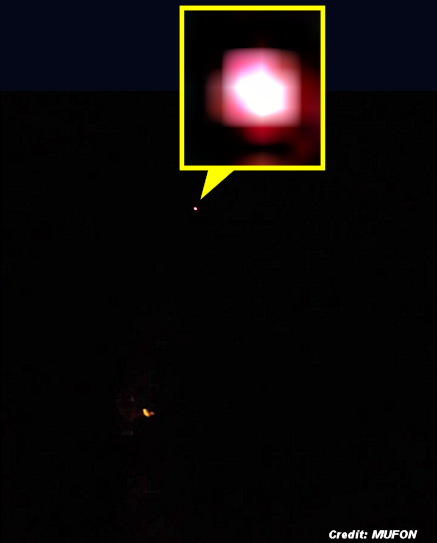 A Pennsylvania witness at Washington reported watching and videotaping a boomerang-shaped UFO that seemed to hover, ascend and move side-to-side, according to testimony in Case 66153 from the Mutual UFO Network (MUFON) witness reporting database.

The witness is additionally reporting watching a “black helicopter” flying in the area prior to the sighting and during the following day; and a military jet during the time of the sighting. The sighting occurred beginning about 1:37 a.m. on June 5, 2015.

“A black helicopter was seen during the daytime flying low over house the day of and the next,” the witness stated. “Also saw a fighter jet not even five minutes after seeing a UFO. It was low enough so that I could tell it was similar to an A-10 warthog.”

The witness was able to capture video (seen below) of the unknown object.

“In the video, the bottom light is my neighbor’s house across the street. I was outside smoking with my fiancé when the light just appeared suddenly so I took a picture and video on my front porch. After floating/ hovering around it moved from left to right, then ascended some, turned left quickly and vanished.” […]